If you watch the Winter Olympics, you’ve no doubt seen alpine skiers whipping through gates on thrilling, steep inclines. It’s called the slalom, but what’s the story behind this seemingly daredevil sport?

Skiing has been around since before people invented the wheel. But it’s come a long way since the first time early humans used planks of wood to cross frozen wetlands in the winter. Today, skiing is still a mode of transportation for people in a few parts of the world – but everywhere else, it’s an exciting athletic sport.

Whether you’re a curious observer or interested in getting started yourself, there’s a lot to learn about slalom skiing. How does it work, where did it come from, and why do the skiers always hit those gates on the way down?

What Does Slalom Ski Mean?

Slalom skiing is a type of alpine skiing. Slalom skiers must make their way downhill between twin sets of poles, called gates, which are spaced a measured distance apart. In most types of slalom ski competitions, the skiers get to go down the course twice. Then their times get added together, and the person with the fastest added time wins.

Many people around the world get their first introduction to slalom skiing from the Winter Olympics. For the Olympics, the order that competitors get to ski in is decided partially by random draw, and partially by their standing in the Alpine Ski World Cup circuit. Then, for the second run, the top 30 competitors ski in reverse order, so the person who was first during the initial run goes last. This helps ensure fairer odds in the race.

As the skiers glide downhill, they have to get both feet and the tips of their skis between the poles of each gate. On the men’s Olympic course, there are between 55 and 75 gates, while the women’s has between 40 and 60. The men’s course also has a steeper incline than the women’s course does.

If you’ve ever watched competitors in a slalom race, you’ll see that the hit the poles of nearly every gate on the way down. That’s because they have to make their turns as tight as possible to shave time off their final score.

No rule says slalom skiers have to hit the gates, but it helps them get a more direct route down the hill by making narrower tighter turns. Any little bit of time that they can save helps them — fractions of a second often win the race.

Slalom skiing is one of the alpine skiing competitions, but there are also different types of slalom races. Most competitors excel most in one or two styles. However, every type of alpine skiing tests both technical ability and speed. Let’s take a look at the kinds of alpine skiing.

Although slalom skiing may sound dangerous, downhill skiing carries the highest risk for participants. In fact, risk and courage are two of the factors that characterize a downhill race, according to the International Ski Federation. Unlike most slalom races, the downhill skiers get just one run in a competition.

Downhill courses are the longest out of all the alpine races. They have less turns and a steeper incline, so they’re also the fastest races. Competitors can fly down the slopes at up to 95 mph.

The slalom ski has gates spaced closer together than in these other races. This means competitors have to make sharp, quick turns to get through every gate successfully. Missing even one gate disqualifies the skier from the race.

The scoring rules for giant slalom are the same as for slalom – skiers get two runs down the course and get scored with a combined time from both. The gates in the giant slalom are farther apart than in the slalom ski, so skiers don’t have to make their turns as quickly.

Super-giant or super-G slalom has more gates than a downhill course, but less than the slalom or giant slalom courses. Super-G skiers also get only one run down the course, like downhill skiers.

Super-G slalom tests the speed of skiers more than their quick turns, making it more similar to downhill skiing. The vertical drop of the course is steeper than either slalom or giant slalom, so the competitors hurtle down the hill faster.

The History of Slalom Skiing

Skiing is a prehistoric activity: people have unearthed early skis made of wooden planks in peat bogs in Norway, Sweden, Finland, and Russia. Although skiing is one of the oldest forms of transportation, modern downhill skiing started in the 1850s.

Here's how we got from the first slalom courses to today's high-speed competitions.

In the mid-1800s, a famous Norwegian skier named Sondre Norheim made a new type of ski with curved sides popular. He also introduced stiffer bindings with willow heel bands, which allowed people to be more nimble on their skis. Norheim is even credited with the original slalom ski turns, which initially were named Christiana turns.

By the late 1800s, skiing had transformed from a practical way to get around to a recreational activity. The thrill of the first non-military-related ski competitions, held in Norway in the mid-1800s, soon caught on. Norheim won Norway’s first national skiing competition in 1868 in Christiana, Norway’s capital at the time and the namesake for the first slalom turns. It only took a few decades for the skiing craze to catch on in the rest of Europe and the United States.

Although Norheim invented the modern techniques that made slalom races possible, a British sportsman named Arnold Lunn generally gets the credit with inventing the slalom ski course.

His predecessors had worked on slalom races of their own, such as Austrian skier Matthias Zdarsky, who created a slalom test run with 85 gates in 1905. However, since these people’s approaches never really influenced modern slalom skiing, Lunn is considered to have founded it in the early 1920s.

Slalom is known as a type of “alpine” skiing since the techniques came from people who skied the European Alps. The International Ski Federation hosted the first slalom world championship in 1931. In 1936, the slalom ski entered the Winter Olympics for the first time in Garmisch-Partenkirchen, Germany.

Slalom ski courses are designed to test the judgment, timing, and skill of the competitors. The gates can be placed in different combinations, and skiers must figure out the best approach to get down the slope in the shortest amount of time without missing a gate.

Every gate is at least 30 inches wide and spaced at least 13 feet apart. The first slalom gates were just little flags placed in the snow.

Later, they made the gates with bamboo canes, but they could hit skiers when they snapped back after an impact. Finally, plastic gates were developed with springs to control the motion, so they tilt as soon as a skier hits them.

Olympic and world championship men’s slalom races must have a vertical drop of 590 to 722 feet, while the women’s races have a drop of 426 to 590 feet.

However, events aimed at competitors with a lower skill level can have less challenging, shorter, or less steep courses. Competitors may choose skis of different lengths, as long as they meet the minimum length requirements.

Besides the obvious boots and skis, what does a slalom skier need to make their way down the slope?

First, the skiers will need bindings. These bindings securely attach the boots to the skis. But if a skier falls, they’re designed to release quickly for safety.

Next, goggles are important. Skiers can choose from some goggle lens colors depending on their preference. Different colors work best for different types of weather, a skier might pick one pair for a sunny day and another pair for a cloudy one. 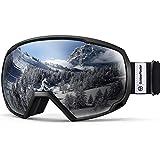 These goggles protect the eyes from glare and weather. Since slalom skiers can reach very high speeds, eye protection is crucial.

Helmets should not be overlooked when purchasing gear. They protect the ears and head from weather and impact.

For slalom competitors, the helmet also has a chin guard, to protect the face from getting whipped by a gate. Slalom ski competitors also generally wear shin pads, hand guards, and face guards to protect them in the event of a high-speed fall.

These suits fit close to the body to cut down on air resistance. They can also include padding for protection during falls.

Slalom skiers use their poles for both steering and balance. Different poles get used depending on the type of competition.

Finally, skiers have to apply wax to the bottoms of their skis for added speed, glide, and control.

Would You Try to Slalom Ski?

Slalom ski competitions are a far cry from a recreational glide down the slopes. That’s what makes them so exciting to watch in the Winter Olympics and other televised competitions. The competitors test the limits of their courage, speed, and technical ability to achieve the fastest race times.

For most people, getting into slalom skiing is prohibitive. It takes a lot of training, expensive equipment, and of course, enough practice time on the right courses.

However, passionate skiers might find that slalom skiing is the next-level thrill they need. Would you give it a try, or are you content with more peaceful slopes? Leave a comment and let us know!

Your Guide to Finding the Best Ski Gloves of the Year