When you want to hit the slopes, you want to do so with the best skiing equipment possible. Whether you’re a beginner, an expert who enjoys back-country skiing, or an experienced skier who loves groomed slopes, Dynastar has the right skis for you. Competitors and recreational skiers alike prefer Dynastar skis for their design, versatility, and durability. I prefer my set of Dynastar skis because they’re easy and comfortable to use and because they’re so durable that they can last for years. My pair of skis is almost 20 years old and still going strong.

Skiing is not a sport for the faint of heart, but it’s quite possibly one of the most soul-cleansing pastimes out there. You can maximize your enjoyment when you go with Dynastar. Their experience in the skiing world, plus their ability to innovate and remain on the cutting edge of ski technology ensure that they deliver a superb experience on the slopes.

Dynastar began with a partnership between two companies in France in 1963. That year, Starflex Skis and Dynamic became partners in ski manufacturing. The name, Dynastar, comes from the two companies merging their names. Just three years later, skiers using Dynastar skis had won more championships than any other brand.

Their run of championships continued with the 1992 Olympics in Albertville and the 1994 Olympics in Lillehammer. Skiers using Dynastar skis won more medals at both those games than any other brand.

In 2001, Dynastar became the first brand to develop a line of skis exclusively for women and is consistently on the cutting edge of ski technology.

In 2016, they produced a ski that not only gives skiers more precision and control on the slopes but is also far more comfortable than older skis. Today, Dynastar is one of the most popular ski brands, with many different models and sizes from which to choose.

There are several different types of skiing, and Dynastar has skis that fit all of them. Whether it’s Alpine skiing, freeskiing, skicross, or ski mountaineering, Dynastar likely has what you want. Dynastar’s full 2018 line is below. 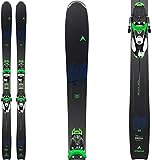 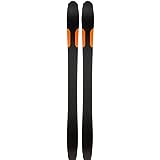 Dynastar has over 40 men’s ski models appropriate to beginners, intermediate skiers, and experts. These models are also designed for specific terrain, from groomed slopes to powder. However, they fall into 11 categories: 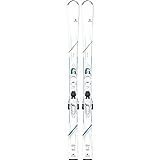 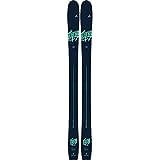 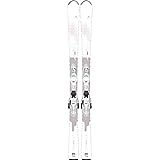 While Dynastar does have a line of skis exclusive to women, it’s not as extensive as their men’s line. They have 16 different skis that fall into four categories: 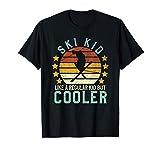 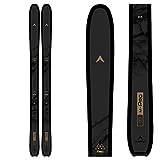 Dynastar has a comprehensive line of skis specifically for children. These skis are appropriate for young children just starting out to older children who are experienced skiers. They have 15 different models falling into six categories:

When you go to an outdoor or ski shop to buy skis, the staff will usually perform fittings for everything from the boots to the bindings, to the skis themselves.

According to REI, a properly-fitted pair of skis will reach somewhere between your nose and eyebrows when standing on end.

However, what you want will ultimately depend on what kind of skiing you want to do. Shorter skis are suitable for inexperienced skiers because they’re easier to control, while expert skiers may want longer skis for speed and wider turns.

How Skiers Feel About Dynastar Skis

Ski equipment is very personal, so skiers are understandably particular about it. Customers on REI’s website give Dynastar skis very high marks for versatility, stability and handling on long, groomed slopes and in powder. Dynastar is strong enough that it gets 4.8 out of 5 stars on REI.

Customers who reviewed Dynastar skis on Skis.com give these skis slightly lower marks, at 4.5 out of 5 stars. While they, too, like the versatility and stability of these skis, one complaint is that some of these skis aren’t really for beginners. That makes buying Dynastar skis when you’re a beginner more difficult.

Things are different over on Pugski.com, where skiers who test ski equipment discuss some of Dynastar’s problems. One major complaint about the Legend line is that these skis are more difficult than necessary to turn, despite their curved design. Carving up the slopes is “slow and bland,” which affects how much fun skiers have.

These skiers prefer the Speed Zone line to the Legend line, but caution that Speed Zone skis are “for fanatics who like to go fast.” If you’re not comfortable with speed, then a lot of Dynastar’s skis may be problematic for you.

Keep in mind that most stores and websites, including Amazon, sell outdated ski models, so you’ll see models that no longer exist on Dynastar’s site.

How Dynastar Skis Compare to Other Popular Skis

Dynastar skis may well be one of the premier ski brands in the world, but they’re not the only well-known and widely used brand. Other brands produce innovative, quality skis as well.

Völkl is considerably older than Dynastar, having gotten its start in 1923. They are one of the last remaining ski manufacturers in Germany. Like Dynastar, they have a wide variety of skis suitable for all experience levels and terrain. They have a slightly wider selection of men’s skis, with 50 models falling into eight categories. Also, they have seven individual models that are their own distinct categories.

Völkl also sells 16 models of women’s skis and nine models of children’s skis. Their children’s skis cost anywhere from $200 to $300 on REI’s website, and adult skis run from $500 to $900, making them comparable to Dynastar’s skis in price.

Customers on Skis.com give Völkl an average rating of 4.4 out of 5 stars. They feel that Völkl skis are stable and comfortable on the hard-packed snow of groomed slopes. Over on REI, Völkl skis get 5 out of 5 stars, but there are only three reviews there. Customers primarily like how fast these skis are, while still being easy to turn.

Ski testers on Pugski.com say that some of Völkl’s skis require more steering than they should for maintaining control on narrower slopes. However, others will go over anything, including bumps and through powder, and over hard-packed snow, with great ease and comfort.

Völkl’s primary advantage over Dynastar is the age of the company. Other than that, Völkl skis and Dynastar skis are pretty comparable to one another.

K2 is another famous ski brand, with seven categories. They have fewer men’s skis than either Dynastar or Völkl, with just 27 models. However, they have 16 models of women’s skis and eight children’s models. In that way, they’re comparable to Dynastar, but their men’s selection leaves a little more to be desired.

K2’s website sells their skis for considerably more than Amazon, with their children’s skis starting at $170 and going up to $330. Their adult skis cost anywhere from $300 to $1,100.

This particular company is an up-and-coming one, with the testers on Pugski.com saying that K2 is closing the gap between themselves and companies like Dynastar and Völkl when it comes to racing skis. Pugskiers like K2 skis because of their lightness and finesse on the slopes.

Their main problem is that it seems some of K2’s skis make a day on the slopes feel like just a plain old day on the slopes, rather than providing a new and exciting experience. They’re also particular about the way the skis actually behave on snow versus how they expect the skis to behave.

Atomic is a very well-known ski maker, comparable to Dynastar regarding its brand recognition and popularity. Like every other good ski manufacturer, they have skis suitable for men, women, children, and different terrain types and experience levels. They have 36 ski models for men divided into nine categories, which is just a little less than what Dynastar offers.

On Amazon, Atomic’s children’s skis seem to be somewhat more expensive than any of the above brands, including Dynastar. They cost roughly $230. However, adult skis are comparable in price to the other brands, starting at $240 and running up to $1,000. On REI’s website, they start at $300 and go up to $600.

Ski testers on Pugski.com love Atomic skis for their speed, strength, and ability to make long, wide turns. In general, Atomic skis seem to be more versatile on the slopes than Dynastar, although many of them are also considerably faster than Dynastar skis.

However, if speed is not your thing (especially if you’re just starting out), then most of the Atomic skis out there probably aren’t for you.

We went through Dynastar’s own website for information on their full line of skis and combed through several different ski websites, including Skis.com and Pugski.com, to gather as much information on Dynastar skis as possible.

Also, we looked up customer reviews for Dynastar skis on REI’s website to see how people honestly feel about these skis. We also went through REI and Amazon for pricing information, in addition to Dynastar’s site and those of their competitors.

Based on what both consumers and experts say about Dynastar skis, we find that this is a brand with enough versatility and durability to fit any skier.

Do you like backcountry skiing? Dynastar has a ski for that. Prefer to make small, short turns on groomed slopes? They have a ski for that, too. If you enjoy racing, they even have skis suitable for that.